Reggie sleeps with me frequently. Because of this, I am subject to his nighttime activities more acutely than if he slept in his actual bed more often. Lately he has been having nightmares, I think.

I’ve seen the videos of dogs “running” in their sleep, seeming to be dreaming of an earlier memory of chasing a ball or a cat just running free in a field. It can even progress to a level of sleepwalking where the dog gets up and runs and can even hurt himself by running into something.

So this makes me wonder can dogs dream, and conversely, have nightmares?

The structure of the canine brain is very similar to the human brain. The hippocampus is the area of the brain that is responsible for memory formation and storage- both you and your dog have one. The hippocampus records electrical patterns of memories from that day, and they are specific. Let’s say you are playing catch with your dog during the day. Specific and identifiable electrical patterns are recorded in the hippocampus. During sleep, these same patterns of brain waves appear. And, the amazing part is that they are so specific that you could identify which part of that game of catch they are from (this is when the other dog joined, this is when we took a break, etc.).

There is a structure in the brainstem called the pons- again both you and your dog have one- that keeps your dog from acting out those re-lived memories. When this is suppressed for any reason you get sleepwalking.

So what has Reggie been doing? I was woken up by him shaking, quivering, and in my sleepiness I stuck my hand out to pet him because I thought he was cold (and that would warm him up??). He whimpered a little and then calmed. A couple times he has woken up howling and jumped straight out of bed. I have heard him whimpering and twitching.

The whimpering and twitching is probably dreaming, or if I knew about it at the time he may have been reliving a particularly stressful memory from that day. The other instances may actually have another explanation- nighttime seizures. That is a topic for another post!

Bottom line, dogs dream and have nightmares all based on memories and activities from the day. So give your dog restful sleep and make each day a great one! 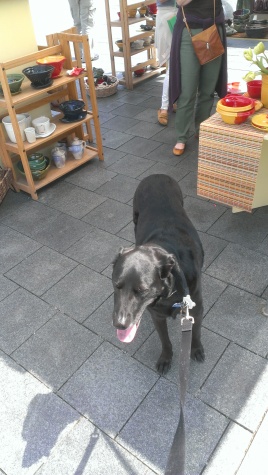